Showing posts from July, 2014
Show all

- July 29, 2014
Couldn't make it to San Diego Comic-Con? You want to hear Bill Plympton's Plymptoons panel (with special guest Jim Lujan )? You want it all for free? Geez, you really are demanding. Well here it is.  Bill talks about Cheatin', Footprints, Deep End, the  Your Face Global Jam, his distribution deal, and of course, the in progress biker-revenge comedy feature Revengeance .... Enjoy!
Post a Comment
Read more 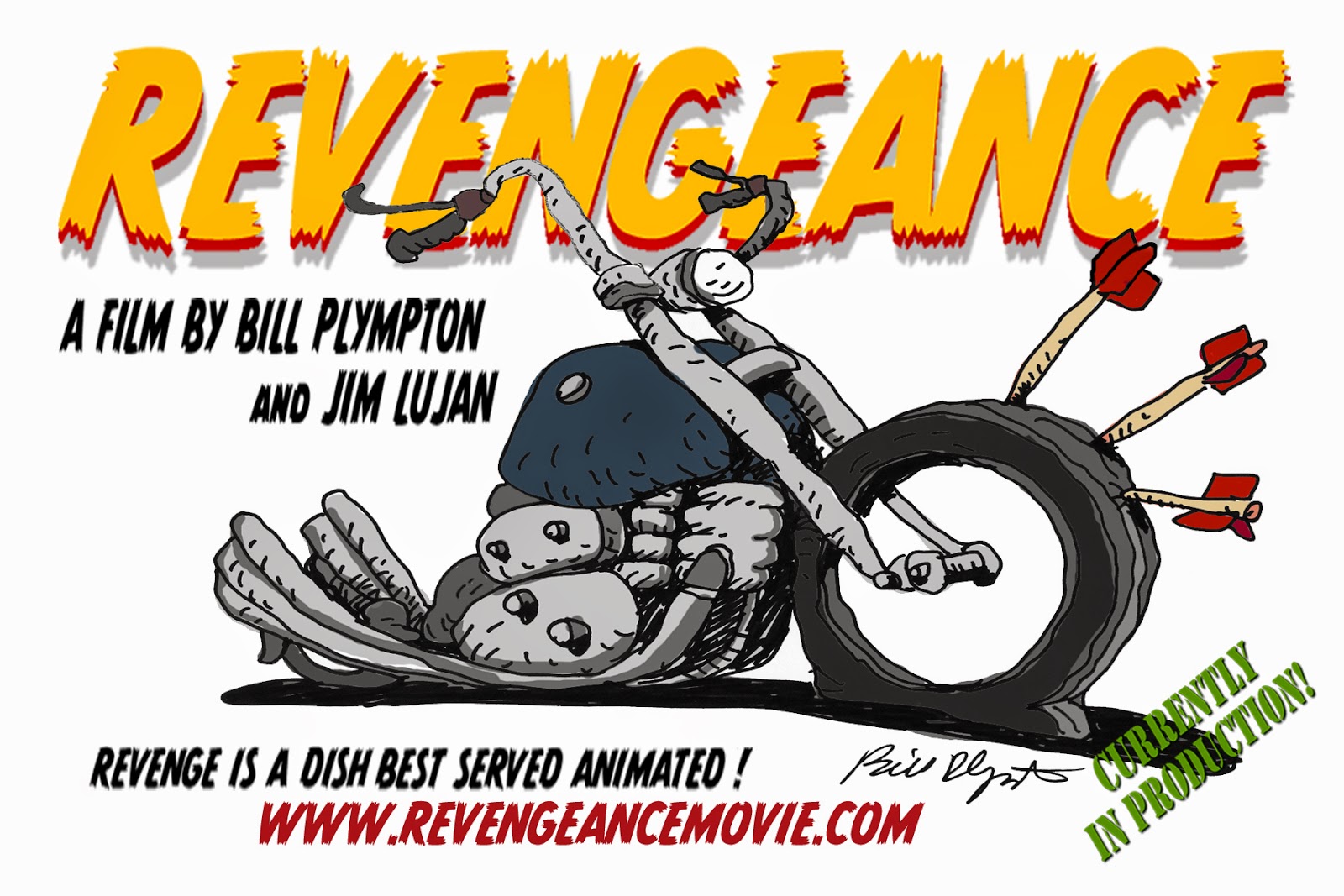 We went with the yellow font.  Postcard originally given away at 2014 San Diego Comic-Con.
Post a Comment
Read more

SEE YOU AT SD COMIC-CON! 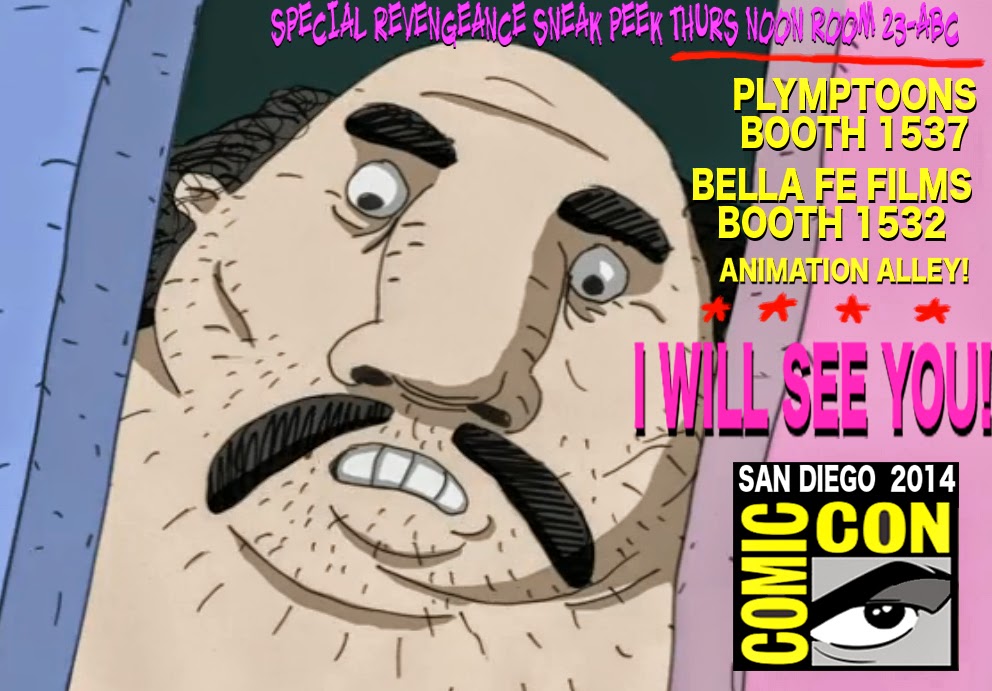 Hope to see you all at San Diego Comic-Con this week! We are going to be showing a sneak peek of the opening minutes of REVENGEANCE ! It will be during the Plymptoons panel on Thursday.  Also get a look at Bill Plympton's new film CHEATIN "! Bill and Jim will both be exhibiting at their booths right across from each other in animation alley. Your one stop shop! PLYMPTOONS PANEL (guest Jim Lujan) REVENGEANCE SNEAK PEEK THURSDAY, JULY 24 12:00-1:00 PM ROOM 23-ABC BOOTHS LOCATED: ANIMATION ALLEY BILL PLYMPTON AT PLYMPTOONS- BOOTH 1537 JIM LUJAN AT BELLA FE FILMS - BOOTH 1532
Post a Comment
Read more 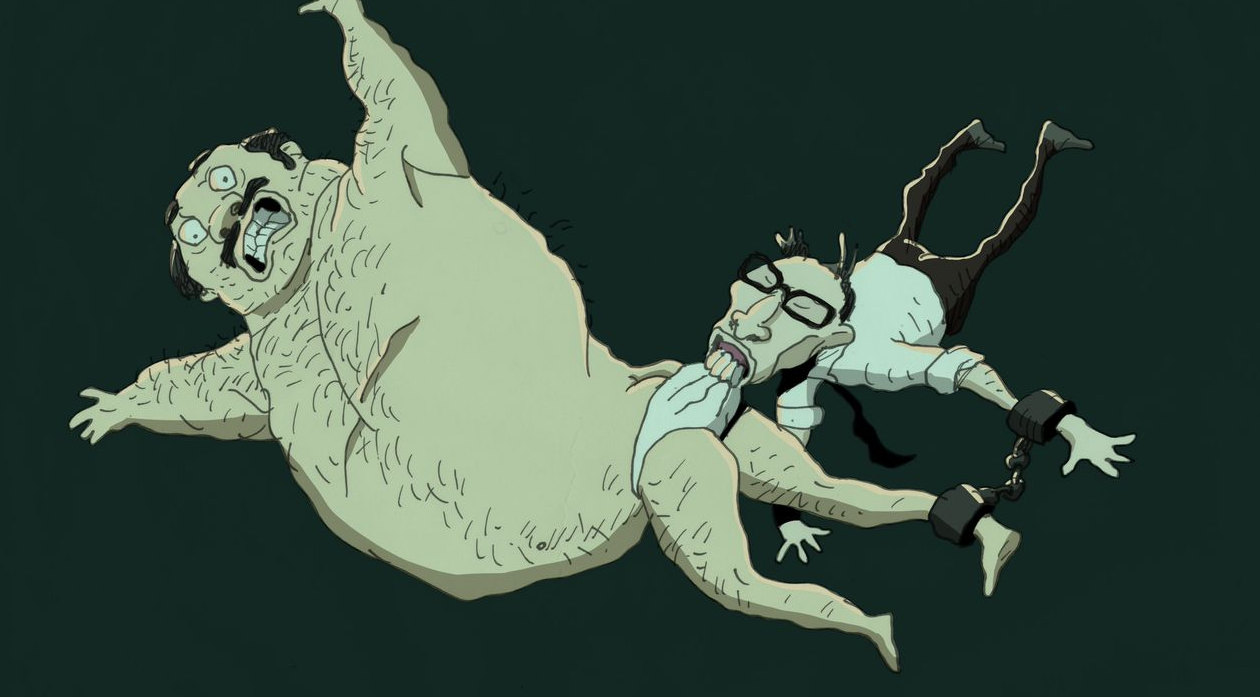 Rod Rosse bites Luis Escobar. Oh yes, there's plenty of biting in this movie! Luis deeply questions his life decisions at this moment. Luis hungers for freedom....or needs more iron in his diet. Things fly around when the party gets wild. Here are the first fully colored shots released from the animated feature REVENGEANCE . These beautifully applied colors are by Sandrine Plympton . This is part of the opening sequence in which the miniscule bounty hunter Rod Rosse attempts to capture the large and hairy (and very upset) Luis Escobar.  Things don't always go as planned...especially when you don't have a plan. SAN DIEGO COMIC-CON: Bill Plympton will be showing the first few minutes of the film on THURSDAY, JULY 27th at NOON in ROOM ABC-23! Hope to see you there!
2 comments
Read more 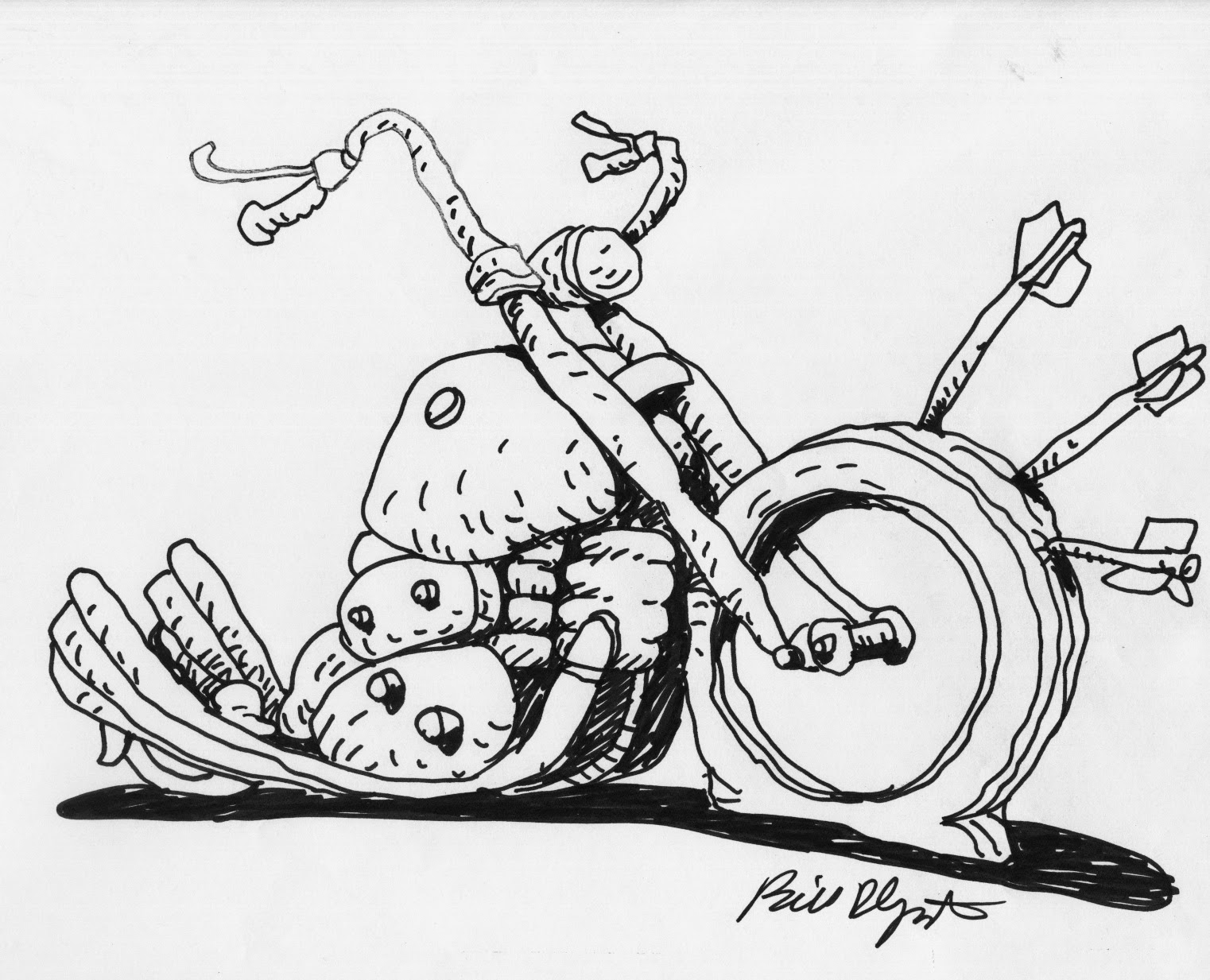 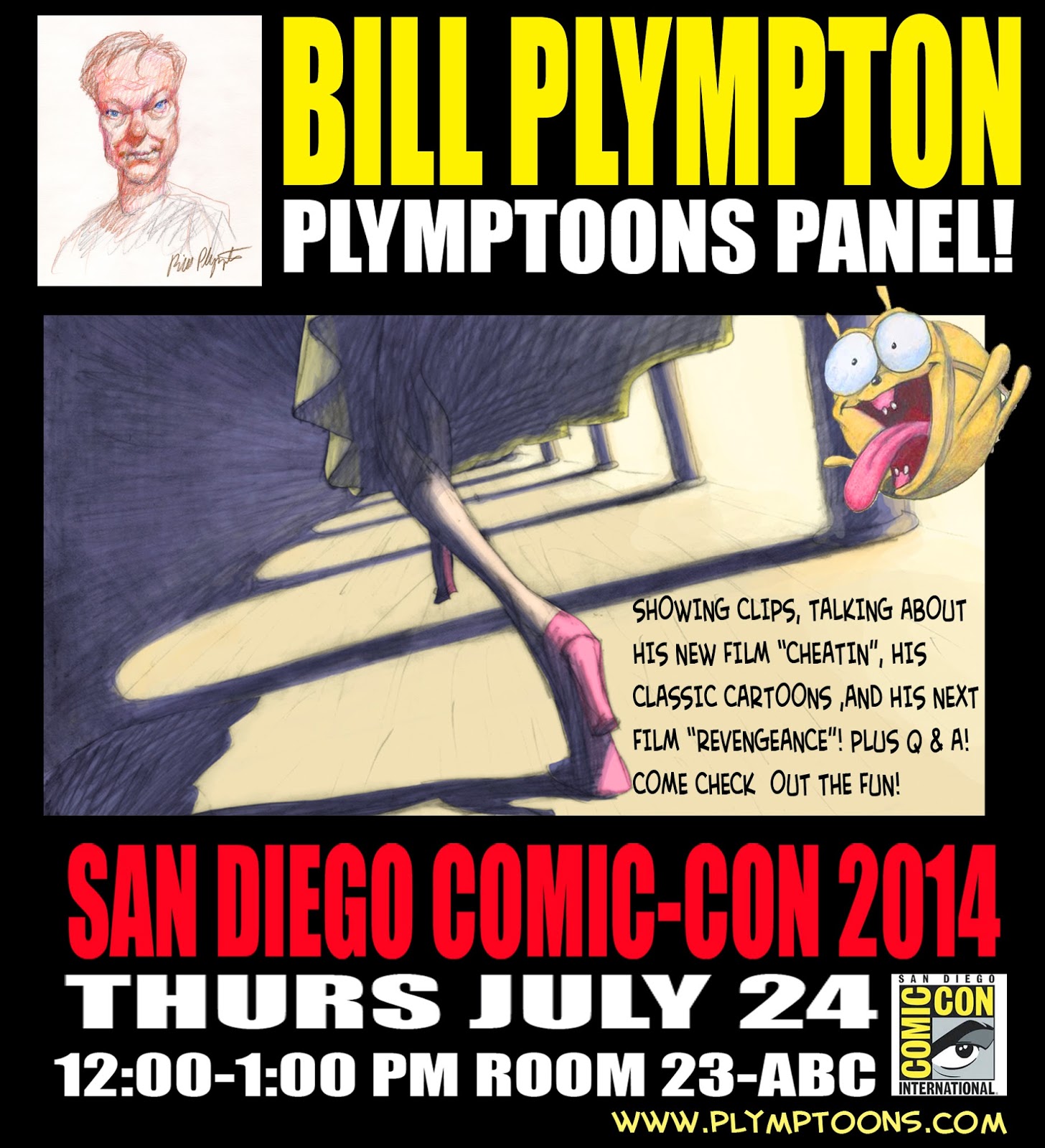 From Bill Plympton: Here's where you can find me at San Diego Comic-Con, July 23-27! Most of the time, I'll be at my booth, #1537 in "Animation Alley". On Thursday, July 24 I've got a panel in Room 23ABC from 12-1 pm. We'll be screening clips of "CHEATIN'" and previews for "REVENGEANCE", plus a Q&A and some surprises! Everyone who comes gets a free Bill Plympton sketch! And on Friday, I'll introduce my short film "Drunker Than a Skunk" at the Comic-Con International Independent Film Festival, playing at 11:35 am at the San Diego Marriott Marquis & Marina.
Post a Comment
Read more 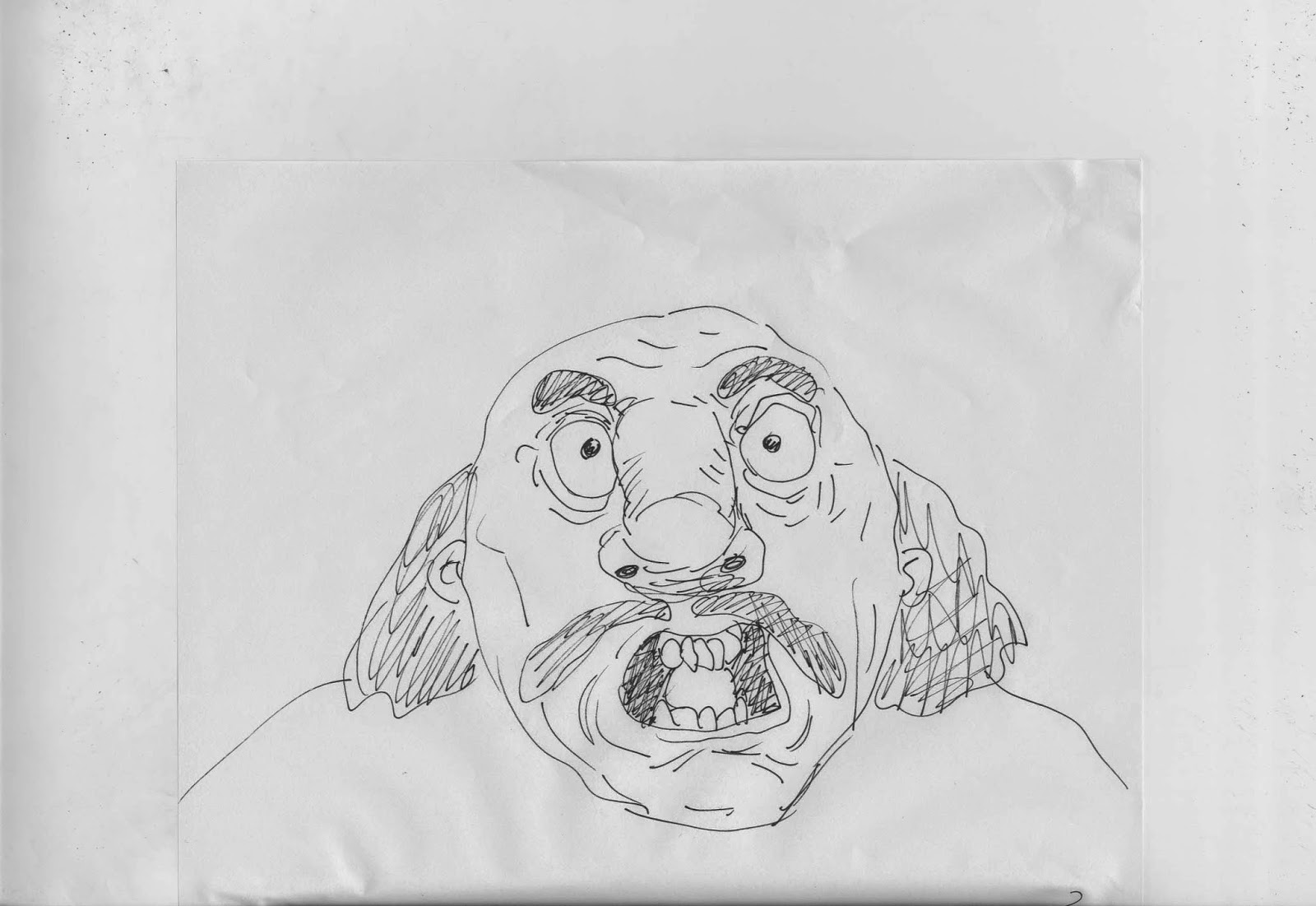 Bill Plympton's early line art for a very shady character. Feel the pain. This is Bill Plympton's line art for a character named Luis Escobar . He's a fugitive that we get to meet at the beginning of Revengeance . Rod Rosse has the distinct pleasure of trying to capture this sweaty, hairy, 300 lb behemoth of a man. Trivia fact: Luis Escobar was named after a very nice Luis Escobar, who is NOT a fugitive from the law nor is he 300 lbs hairy or sweaty. The real Luis Escobar works on the Simpson's TV show and is an amazing artist.  Jim Lujan decided to name this character after his friend, Luis, because of the total contrast in personality. Check out the REAL Luis Escobar: http://www.luisescobarblog.com/
Post a Comment
Read more 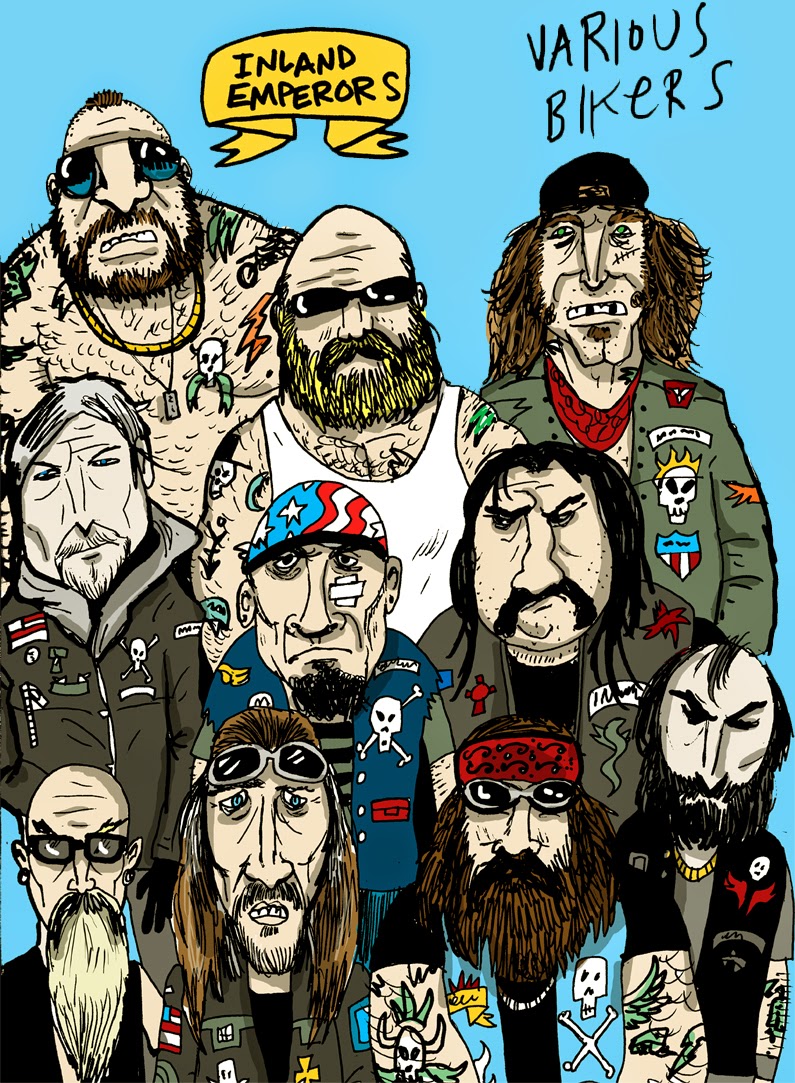 Bill Plympton is working off of Jim Lujan's character designs like the one above. The Inland Emperor biker club plays a large role in Revengeance. Consider them our "stormtroopers", if you will. They are the brutal enforcers who ride upon their mighty iron steeds fueled by meth and bravado! Here are some of Jim's designs that Bill will be working from when drawing the characters. Bill is hand drawing the film as we speak. Jim's designs and Bill's drawings are coming together AMAZINGLY. A match made in heaven (or at least on the outskirts)! There are several character sheets like this floating around, and we'll be posting more in the near future. Stay tuned and meet more of the cast from Revengeance .
Post a Comment
Read more

WHO IS ROD ROSSE (the One Man Posse)? 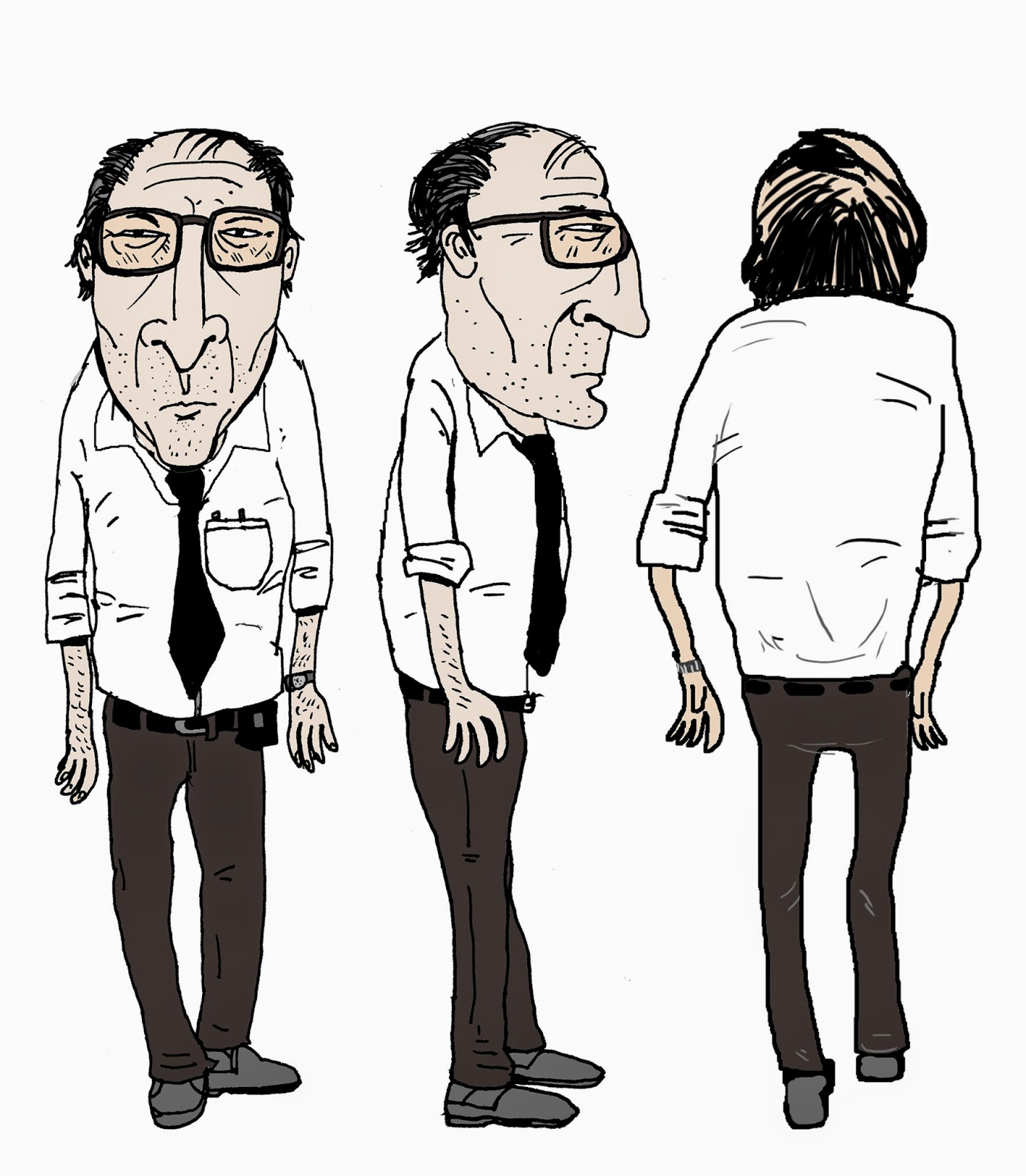 Rod Rosse the One Man Posse by Jim Lujan  Just who is this guy Rod Rosse the One Man Posse ? Well, Rod is a complicated fellow and a bounty hunter who will use any means necessary to catch his targets (and we mean any ). Mostly, he likes to "roofie" them, and cuff them when they are "lights out".  He's what happens when you take one part Don Knotts and one part Steve Buscemi, and mixed it with a whole lot of sneaky little bastard. He and his mother run Rosse Bail Bonds in Long Beach, CA. Bill Plympton's first take on Rod Rosse As you can see above, this is Bill Plympton's very cool take on the character. Rod Rosse has a signature comb-over, which Bill has since added. The thing about Rod Rosse is he can take a licking and keeps on taking another licking. He's an expert at getting beaten up.  Below, you can see Rod in action in the Jim Lujan short ROD ROSSE THE ONE  MAN POSSE . Then stay tuned and see Rod star in REVENGEANCE , in productio
Post a Comment
Read more
More posts